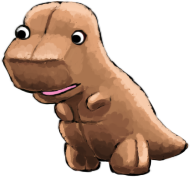 Game Role
Story
Gender
N/A
This character, generally known as the Greeter, is not a very important character, but noticable in Braid. At the very end of the last level of every World (with the exception of World 1) it walks out of a castle, and tells Tim something generally along the lines of "Sorry, but the Princess is in another castle."

The Greeter appears to be a dinosaur or a person in a dinosaur costume, possibly of the same family as the Tyrannosaurus Rex. However, the Greeter is only slightly taller than Tim, and does not appear to have any carnivourous traits. The Greeter is muddy brown in colour, has short arms, short legs and a stubby tail. The Greeter also appears to have a seam line running through the middle of it's face, body, arms and legs, possibly indicating that it is a stuffed toy.

The "Sorry, but the Princess is in another castle." is a reference to Mario. In the original Super Mario Brothers, Mario finished each world by defeating Bowser, a dinosaur-like creature. Instead of rescuing the princess, he found one of her retainers who told him "Thank you Mario! But our princess is in another castle!" Physically, the Greeter does not resemble Bowser, but does look a bit like Yoshi, a friendly dinosaur who appeared in later games in the series.

Retrieved from "https://braid.fandom.com/wiki/Greeter?oldid=5456"
Community content is available under CC-BY-SA unless otherwise noted.